The Cross of Caravaca (la Vera Cruz), is a powerful amulet believed to ward off evil, increase good fortune, andto impart a deep feeling of tranquility. It is a gift from the heart to give inner peace. This elegant piece of jewelry comes from the Caravaca, small townof Spain and province of Murcia.

The Cross of Caravaca made out of sterling silver, is a double-cross-barred crucifix on which the figure of Jesus is flanked by two winged angels who kneel in postures of prayer. The arms of the savior are nailed to the upper crossbar, and the supplementary crossbar projects to the sides. The other side of the crucifix has the figure of The Virgin Mary, therefore the Cross can be worn, facing either side.  In the early 13th Century, Caravaca was at the frontier of the Arab-Spanish border - during a time of continual conflict between the predominantly Christian Castile-León in Spain, and the Muslim-run Granada.

In 1232, a local priest was imprisoned in Caravaca by the Moors. In May of that year, Abu-Zeid/Ceyt, the Moorish king, ordered that all the prisoners languishing in the castle's dungeons be brought before him so that he could question them, before deciding their fate. Amongst them was Priest Gines Perez Chirios whom, out of curiosity, the King ordered to perform a Christian Mass. But, as the priest began, he realized that he didn't have the necessary crucifix. All the crosses within the Kingdom had been destroyed by the invading Arabs and without a cross, true Mass could not be performed. So, he refused. At this juncture, the King and his captors grew angry and ordered the priest to proceed. But, once again, he refused. Then, like a miracle, the chamber was flooded with a brilliant light and two angels appeared, lowering a two-armed cross - as if down from Heaven - and they gently placed it onto the altar. Overcome by the vision, Abu-Ceyt fell to his knees. He decided then and there, to convert to the Christian faith. So, along with his Arabic subjects, they all became Christians.Since that date, the Catholic Church has acknowledged this as a miracle and the cross has been called a Holy Cross or the True Cross (the 'Vera Cruz')

The Caravaca Cross is called a “Lignum Crucis”, because it contains a fragment of the True Cross on which Christ was crucified. Today the town of Caravaca is the 3rd largest pilgrimage center in Spain because of the “True Cross”. To millions of people around the world, the Caravaca Crossbbis simply the best symbol of faith and inspiration.

A festival of the Holy Cross is held in Caravaca every year in May.

Made of silver (14k gold is also available upon request). 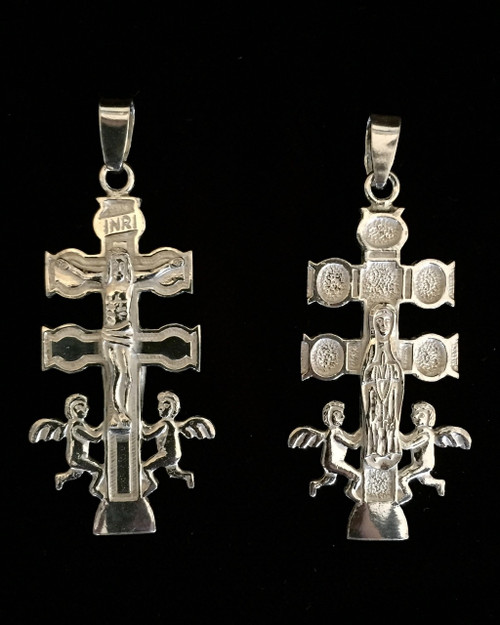