The Ankh symbol represents the “Key to Life”. It is very strong healing tool, balancing the energy inside whole energetic system of the wearer. It enhances the flow of energy and its circulation by bringing the new, pure energy by the top of the shape and removing old, used one by the bottom of the cross. The Goddess Isis is often portrayed with the Ankh in her hand tomaintain power and energy in all her endeavors.

Historically speaking the Ankh was transformed from the Atlantis Cross by connecting both “legs” and thereby becoming a strong emitter of energy. Through the upper part of the Ankh(head) the vibration of Green is brought in, which is a healing and regenerative vibration, and through the bottom of the cross harmful energies or vibrations are released (the bottom emits Negative Green).

Both "hands" release: Red to the right and Violet to the left.

To many, the Ankh is the precursor to all crosses known today.

In this elegant silver pendant we can recognize 3 most powerful symbols of Ancient Egypt:

- Was – the long pole of the sceptre

- Djed – amplifiers inside the Ankh to stabilize the power

Osiris ruled the world after the God Ra and when Ra left the Earth to rule the heavens. When Osiris was murdered by his brother Set, he became known as God of the Underworld to indicate that he was the very first god to have died. As such, it is Osiris's responsibility to be the ruler, protector and judge of the deceased. But since he was also the very first god to resurrect from the dead, he also represents the resurrection into Eternal Life. Hence from Ancient Egypt Osiris's sceptre has been used as a symbol of royal or imperial power and authority. It is ceremoniously held by those in power in the course of performing their duties.

This unique combination of the Ankh embracing the Osiris sceptre gives the bearer a strengthened will, and beneficial power for himself and those who's life he can possible affect. This symbol also helps with the making of decisions that will withstand the scrutiny and judgment of others.

Made of silver (14k gold is also available uppon request). 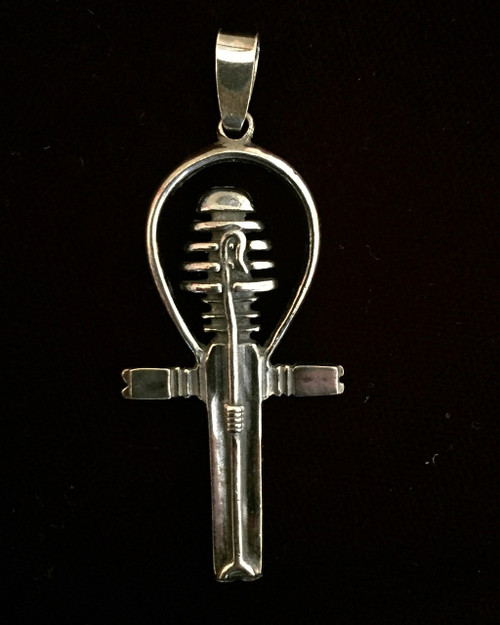