The symbol of Atlantis was discovered at the end of the 19th century by Marquis d’Argain, the French Egyptologist. In the King's Valley of Luxor, he unearthed a ring made of clay with a symbol on it which was unknown to him. Andre de Belizal, an exceptional Dowser, Egyptologist and pioneer in the field of shape waves, inherited the ring and discoveredits exceptional properties.

But the symbol didn’t receive great notice until Howard Carter, the organizer and the leader of theexpedition to open King Tut’s tomb, wore the ring while excavating the tomb. He was the only member of the team who was notstricken with a premature or sudden death. Many believed this was due to a curse inherited by those who disturbed the Pharoah'speace. But as Carter and de Balizal believed, it was more likely due to the protective shield the ring provided to the wearer fromharmful radiations and vibrations.

It is believed that all ancient Egyptian wisdom came from Atlantis. Carter many times referred to the unusual powers of the symbolstating that he believed that such a powerful symbol and shape was the creation of the powerful civilization of Atlantis and was inheritedby the Egyptians.

This fine piece of jewellery in sterling silver (14K gold available on special order) has the Atlantis symbol engraved into it and therefore protects against unwanted outside influences. It supplies healing energy to balance any distressed areas of the body and soothes physical pain. The symbol is considered a powerful telepathy aid and sensitizes you to psychic knowledge.

The ring should not come in steady contact with only other metal while you are wearing it. Wear it away from other rings on the same or adjacent fingers. This is because when the ring touches another piece of jewellery it creates a new shape of unknown vibrations.

If you wish, you can safely remove it at night or when you shower, etc.

Made of silver (14k. Gold available on special order).

Care: While minor scratches will not affect the functioning of the ring, damage to the symbol will render it ineffective. If necessary, the ring can be repaired by a jeweller, as long as the symbol is not altered by heating etc. The small gap at the back must always remain open.

"I just wanted to share an interesting story about my Atlantis ring.  I work in social services and last week I went up to the front counter to speak with a person who wanted to apply for social assistance.  I was wearing my Atlantis ring on my ring finger on my left hand.  The person wasn’t happy with my answer so he slammed my left hand with a closed fist.  I was lucky my hand wasn’t broken.  Instead, my baby and middle finger immediately started to swell and bruise – but there wasn’t a mark on my ring finger.  This is a perfect illustration of the protective properties of the Atlantis ring.  Now I need an Atlantis bracelet to protect my whole hand!!
Hope to see you again soon.
Love & light,"
Denise 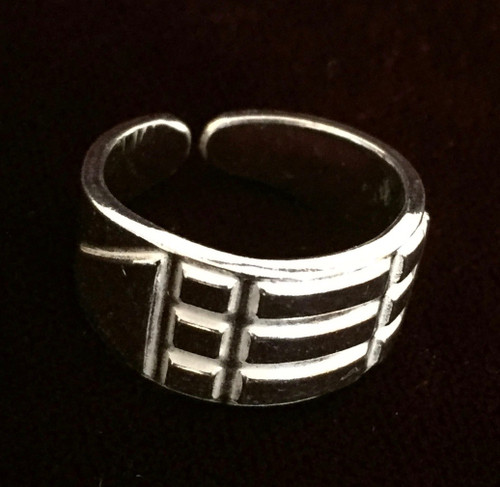