Ankh, when it is properly done according to Sacred Geometry principles, it possesses immense power and is defined as a symbol representing the Life on both: physical and eternal aspects of life. Like the Ring of Atlantis, its history is lost in the meanders of human history.

Ankh has been known to Egypt from the prehistoric period, long before the rise of the pyramids. It has always been an attribute of divine creative power, and its true name means "Key to Life". As a symbol of giving and sustaining life, Ankh is typically associated with material aspect of life such as water (in Egypt it was believed that water regenerates and rejuvenates life) or sun, as well as with gods, who are often depicted with this symbol. Egyptian kings were also often identified with Ankh due to their power over people's lives, or as “givers of Ankh” through their association with gods.

Ankh were usually worn as amulets of life and placed on the mummies to energize their resurrected spirit. Gods and Kings are often shown with the symbol of Ankh, which distinguishes them from ordinary mortals.  Ankh was understood as a symbol of eternal life and donor of immortality. It was believed that the energy emanated from Ankh can be absorbed by his bearer. For the followers of that believe, Ankh is a direct connection with the divine force that pervades the Universe.

Ankh is a very powerful talisman protecting the wearer from the evil forces of degeneration and fall. It was identified with Isis and Osiris in the Early Dynastic Period.

This amazing cross is a powerful talisman, which supplies the wearer with protection against the forces of evil, destruction and danger.

It carries Universal Force through the chakra system to the head, simultaneously filtering the flow of destructive energy, hence strengthening the body and its vital force.  Ankh also represents the key to eternal life after death. It survived as an icon with mystical power until the threshold of Christianity. Due to its power though, it was still used in various religious rituals. Until today it still serves as one of the most important symbols of the Coptic Church. 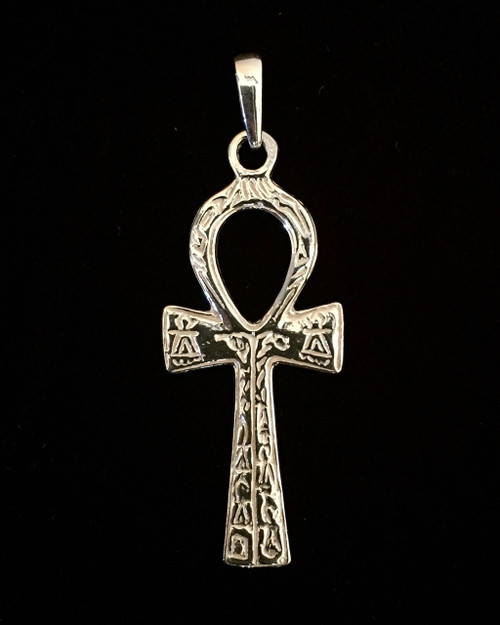