Pentagram, The Power of Light, also called the “white pentagram”, is an elegant piece of jewelry representing a basic pure protection sign.

This symbol emits the energy to create the shield reflecting evil wishes and curses, turning them back towards their source.

Pentagram as a symbol protects its bearer during performing magic or ritualistic practices and prevents from overstepping into dangerous area.

It also enables its user to call evil powers into their place, entrap and imprison them, and rule over supernatural forces. Up until medieval times, the five points of the pentagram represented the five wounds of Christ on the Cross.

It was a symbol of Christ the Saviour. The church eventually chose the cross as a more significant symbol for Christianity, and the use of the pentagram as a Christian symbol gradually ceased.

The Pentagram is a symbol of a star encased in a circle. Always with 5 points (one pointing upward), each has its own meaning. The upward point of the star is representative of the spirit. The other four points represent an elements: earth, air, fire, and water. All of them contribute to life and are a part of each of us.

To wear a pentagram as a necklace or other form of jewelry, is understood as the connection with the elements and respecting Gaya as a Planet and as a  Mother Earth.

Made of silver (14k gold is available upon request). 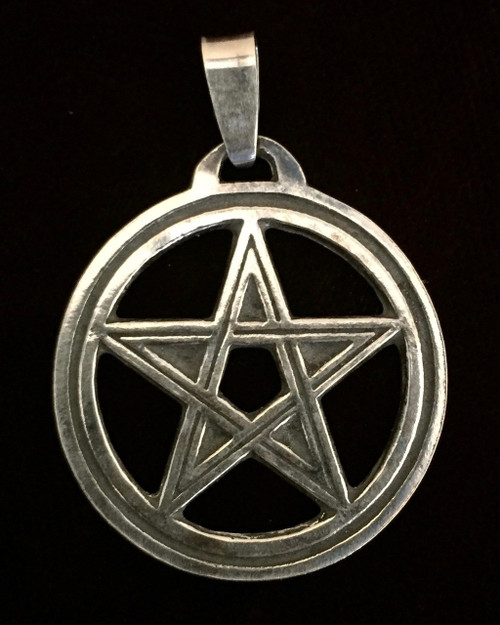